Kalki Avatar of Vishnu in Kalyug 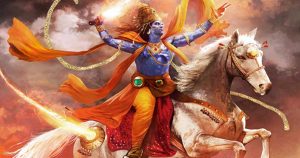 Kalki The tenth avatara of Vishnu will be Kalki.

Towards the end of the Kali era, all people will be dastardly. They will oppose the Vedas, become robbers and will be concerned only with wealth. The disbelievers will then become kings and these kings will also be cannibals.

Much later, Kalki will be born on earth as the son of Vishnuyasha. He will take up arms to destroy these disbelievers. Kalki’s priest will be the sage Yajnavalkya. The norms of he four classes (varna) and the four stages of life (ashrama) will be established yet again. People will honor the sacred texts and become righteous. It will then be time for the dawn of a new Satya Yuga, a fresh period of righteousness. In every cycle (kalpa) and in every era (manvantara) Vishnu is thus born in various forms. It is a sacred duty to listen to the stories of the ten avatars. The listener attains his desires and goes to heaven.