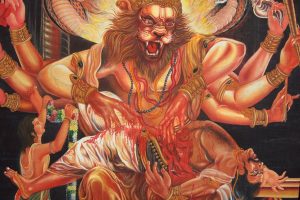 Hiranyaksha had a brother named Hiranyakashipu. Hiranyakashipu was furious to learn that his brother had been killed and the resolved to kill Vishnu. But this could not be done unless h e himself became powerful land invincible. Hiranyakashipu, therefore, began to pray to Brahma through difficult meditation. Brahma was pleased at these prayers and offered to grant a boon.

Brahma granted the desired boon. And Hiranyakashipu was happy. He thought that he had taken care of all possible eventualities. And since he had become so powerful, he conquered all the three worlds and kicked the gods out to heaven.

Meanwhile, the gods had been driven off from heaven. They had also been deprived of their shares in yajanas by Hiranyakashipu. These shares now went only to the asura king. In desperation, they went and prayed to Vishnu and Vishnu promised them that he would find a solution.

One day, Hiranyakashipu called Prahlada to him. “How is it that you escaped each time I tried to kill you?” he asked.

“Because Vishnu saved me,” replied Prahlada. “Vishnu is everywhere.”

“What do you mean everywhere?” retorted Hiranyakashipu. He pointed to a crystal pillar inside the palace and asked, “Is Vishnu inside this pillar as well?”

“Very well then. I am going to kick the pillar,” said Hiranyakashipu.

After  Hiranyakashipu  died,  the  gods  were  restored  to  their  rightful  places.  Vishnu’s  made Prahlada the king of the asuras.