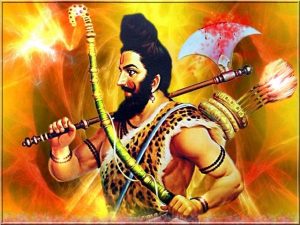 There  was  a  king  named  Kartavirya  who  had  received  all  sorts  of  boons  from  the  sage Dattatreya. Thanks to these boons, Kartavirya had a thousand arms and conquered and ruled over the entire world. One day, Kartavirya went on a hunt to the forest. He was very tired after the hunt and was invited by the sage Jamadagni had a Kamadhenu cow. This meant that the cow produced whatever its owner desired. Jamadagni used the Kamadhenu to treat Kartavirya and all his soldiers to a sumptuous feast.

Kartavirya was so enamoured of the Kamadhenu that he asked the sage to give it to him. But Jamadagni  refused.  Kartavirya  then  abducted  the  cow  by force  and  a  war  started  between Kartavirya and Parashurama. In this war, Parashurama cut off Kartavirya head with his axe (parashu) and brought the Kamadhenu back to the hermitage.

After some time, Parashurama was away when Kartavirya sons arrived at the ashrama and killed Jamadagni. On the death of his father, Parashurama’s anger was aroused. He killed all the kshatriyas in the world twenty-one times. On the plains of Kurukshetra, he built five wells which were filled with the blood of kshatriyas. Eventually, Parashurama handed over the world to Kashyapa and went and lived on Mount Mahendra.