Vamana Avatar of Vishnu in English 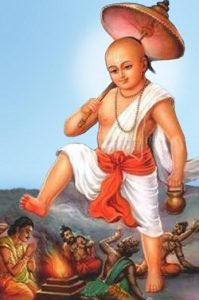 Prahlada’s grandson was Bali and Bali became very powerful. When he was the king of the asuras, there was a war between the devas and the asuras. The gods were defeated and were driven off from svarga. As always, the gods fled to Vishnu and began to pray to him to save them. Vishnu assured the gods that he would do something about Bali.

Accordingly, Vishnu was born as the son of Aditi and Kashyapa. The son was a dwarf.

King Bali had arranged for a huge sacrifice and had announced that, on the occasion of the sacrifice, he would not refuse anyone a boon. The dwarf arrived at this sacrifice and began to recite the Veda’s. Bali was so pleased at this that he offered the dwarf a bon. Bali’s guru (teacher) was Shukracharya and Shukracharya thought that there was something fishy about the way the dwarf had arrived. So he tried to restrain Bali.

“No,” said Bali. “I have offered a boon and I shall stick to my word.” What boon do you desire? I will give whatever you want.”

Before a boon was actually granted, a small rite had to be performed with holy water. Shukracharya was still trying to do his best to prevent the boon from being given. So he entered the vessel in which the holy water was kept to seal the mouth of the vessel and prevent the water from being taken out. To get at the holy water, the vessel was pierced with a straw. This straw also pierced one of Shukracharya’s eyes. Ever since that day, the preceptor of the demons has been one eyed.

“Give me as much of land as may be covered in three of my steps,” said the dwarf. “I need this as Dakshaina (fee) for my guru.”

Bali agreed. But the dwarf adopted a gigantic form. With one step he covered bhuloka. With another step he covered bhuvarloka. And with the last step he covered svarloka. The three worlds were thus lost to Bali and Vishnu returned them to Indra. Bali had no option but to go down to the underworld (patala). But so pleased was Vishnu at Bali’s generosity that he granted the asura the boon that he would bear the title of Indra in the future.