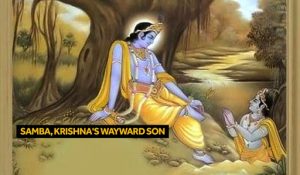 Samb was the son of lord Krishna and born to Jambvati. He had kidnapped Lakshmana, the daughter of Duryodhana from her Swayamvar. Infuriated Kauravas chased them and, with difficulty, they caught Samb and tied him. When the Yaduvanshis got the news, they began preparations to launch an attack on Kauravas. Balarama pacified them and reached Hastinapur alone. There he received a warm welcome from the Kauravas. Balarama said to them: “It is an order of the king Ugrasen that you should see Samb off with his newly wedded wife.” Hearing Balarama’s words Kauravas got angry and began to deride Yaduvanshis. Infuriated by Kauravas derisions, Balarama trained his pestle and plough. He intended to turn over the town of Hastinapur into the river Yamuna. When the city began to shake, Kauravas felt perplexed and begged Balarama for his pardon. Balarama assured them to be fearless and returned to Dwaraka with Samb and his newly wedded wife Lakshmana.