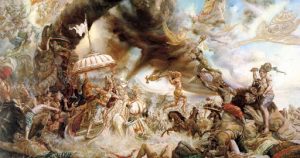 Dynasties that would occur in Kali Yuga

Sukhdev describes about the dynasties that would occur in Kali Yuga. Ripunjay or Puranjay would be the last king of Brihadratha dynasty. This dynasty would be succeeded by the kings of Nanda dynasty. Then a diplomatic Brahmin, named Chanakya, would exterminate this dynasty and enthrone Chandragupta Maurya. In Maurya dynasty, a great king would occur by the name of Ashokvardhan. After him, Yavans would rule then for six hundred and forty years. Their rule would be succeeded by the governance of the fair-complexioned foreigners, who would rule for one hundred and sixty years. Thereafter, there would be no king and no subjects because people from all the classes would come forward to rule.

Ruler  selected by the majority votes

The ruler would be selected by the majority votes. There would be no any thing like holiness. Cows would grow thin like nannies. People would not marry, as per their castes. Greed, selfishness and sex would be the base of marriage life. In adverse conditions, spouses would desert each other. There would be nothing like duty, responsibility and conduct. Hair would be the main item of adornment for the women.

People would not have the knowledge of religious scriptures in Kali Yuga. Talkativeness would be identified with knowledge. Only those would be regarded as clever, who could pick others’ pockets. Children would not regard or pay due respect to their parents. Children would maintain relations with parents till their marriage only, not after that. Boys would not touch the feet of their own parents, but would pay full respect to their father and mother-in-law, Brother-in-law would be dearer to them than their own brother.

Sukhdev says: Parikshit, Kali Yuga is the mine of faults, But it has only one great virtue – that the people will acquire divine position only by reciting Lord’s name. Recitation of Lord’s name, regardless of intention and motivation– whether it is love, derision, laziness or maliceness- would destroy one’s sins.

But O Parikshit, the sinister people would do even the most difficult tasks in Kali Yuga, but they would not recite Lord’s name. They would not have an interest in the Lord. Their interests would be more in sensuous things like sound, touch, beauty, scent etc.

O Parikshit, the Paramagati (supreme salvation) that people could receive by ten thousand years of meditation in Satya Yuga; by performing Yagya for hundred years in Treta Yuga and by worshiping Lord’s idol for ten years in Dwapara Yuga, that supreme salvation is easily available for people in Kali Yuga simply by reciting Lord’s name for one day and one night continuously. But still, in Kali Yuga people would not have faith in Lord’s name. It is their misfortune.

Sukhdev says: O Parikshit, recitation of Sri Hari has occurred in Srimad Bhagavat MahaPurana. O King, this soul is eternal, so you abandon this animal- like feeling that you would die. You are not the body. You are the eternal form of joy. Imbibe your mind with the reflections of Paramatma (supreme spirit) and have a sight of Him in the end. You are God yourself. Then neither Takshak nor death would do any harm to you. Unify yourself in the supreme being by thoughts like, ‘I am Parabrahma.’ Thus Sukhdev assured Parikshit to be fearless.