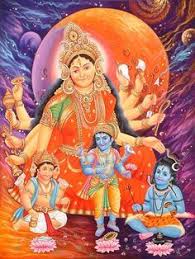 There are few interesting myths to tell about Aditi, but her status and roles change so remarkably that she illustrates the fluidity of Hindu myths. Her name
literally means eternity (free, boundless, infinity), so philosophically she is a per­sonification of time. Aditi slowly evolved as the prototype of the Great Mother, Devi, or Sakti.
In the early Rigveda she was described as the mother of seven (and later twelve) adityas (children of Aditi), and was prayed to for protection. There are prayers to her in this period asking her to give the Aryans children and cattle, protection and forgiveness.
In the epics (the Mahabharata and the Ramayana), Aditi is the wife of Kasyapa, a progenitor or grandfather of creation. She is explicitly the mother of Vishnu, the twelfth aditya. But Aditi’s earlier praise as Deva-matri (mother of the gods) led to her highest role, in the early Puranas. The adityas came to include all the devas, so she became mother of the 330 million gods and god­desses who made up all the various classes of medieval polytheism. Her oppo­site, in both name and role, was Diti (bound, finite). Diti’s children were the daityas (born of Diti), who were also known as the asuras.
In the sectarian Vishnu Purana, where Vishnu was the supreme god, Aditi was only the mother of Vishnu’s dwarf incarnation (Vamana). In the Matsya Purana she was given a small part: she received a pair of earrings from Indra at the churning of the ocean.
In the Vedas Aditi was the wife of Daksha, grandfather of all creatures. But in the Vishnu Purana Aditi had become the daughter of Daksha and wife of Kasyapa. Her role as the parent of the gods was continued into her rebirth as the mother of an incarnation of Vishnu. According to the Devi Bhagavata, Aditi was reincarnated as Devaki, the mother of Krishna.
All the variations did not go unnoticed. The great medieval commentator Yaska explained that all these variations could be true because the gods were born of each other. Another explanation accounted for differences in parentage or marriage by saying that these were the results of rebirths, not just in this age but in the many ages (yugas), with varying roles in each.