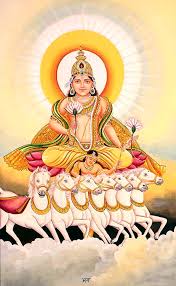 The sons born to Kasyapa-prajapati (a grandfather or procreator) and Aditi (mother of the gods) are called the adityas. In the hymns of the Rigveda, Aditi only had seven or eight children. But by the time of the Brahmanas there are twelve adityas: Dhata, Mitra, Aryaman, Rudra, Varuna, Surya, Bhaga, Vivasvan, Pusha, Savita, Tvashta, and Vishnu. They are among the most important of the earliest
Vedic gods. This grouping could represent the twelve months, as they are celestial deities. In another context aditya (singular not plural) referred to the sun (Surya).
But as the centuries passed Aditi’s role as mother expanded to all of the devas. First, she became mother of Indra, who was called the king of the gods in later mythology. The next addition to the myths spoke of twenty-one children (besides the twelve) who were also called adityas. And finally, as a prototype of the Great Mother, Aditi became the mother of the entire world of devas, who have become 330 million, all born from the 33 children of Aditi.
In the earliest stage of their conception, the adityas seem to have been per­sonifications of light and of the phenomena of the heavens. The seven adityas were the sun, moon, and five planets. They were rulers of the celestial realm and symbols of kingship and sovereignty, especially Varuna, Mitra, and Aryaman. But their importance must have been developed in myths prior to the Aryans’ arrival in India (or for those who find the Aryans a transformation of local tribes, before the composition of the hymns of India’s earliest literature, the Rigveda). Their myths are not retold in the Rigveda, and their supreme importance receded rapidly. Three more brother gods—Bhaga (the dispenser), Amsa (the share), and Daksha (the capability, “ritual skill”)—were celestial models for the social and ritual relationships of the earliest Aryans. But their myths were also not to be found in the Rigveda, as the adityas were in the process of being replaced by the Vedic fire ritual (the Agni cult) and the Rigvedic triad of Agni, Indra, and Surya.
The myths of the seven adityas can be found in Old Persia (Iran) in the form of their equivalents among the Persian gods (Amesha Spentas) of the Avesta.