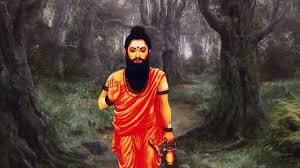 A rishi (sage) who conquered the Vindhya mountains
Agasti was mentioned in a hymn in the Rigveda dedicated to Mitra, a solar deity. That hymn said that two of the adityas, Mitra (comradeship) and Varuna (binder, “all-seeing”), placed their semen in a pot and set it before Urvasi, an unusually beautiful apsara (celestial maiden). Because she had aroused their desires, Mitra and Varuna cursed Urvasi to live on earth as the wife of the rishi Pururavas. Agasti (or Agastya) and Vasishtha were the sons born to her. Later versions expanded and elaborated on the details.
Agastya was the form of his name used in later myths. It was said that his name came from his command that the Vindhya mountains bow down and wor­ship him. He received another name of Ocean Drinker (Samudra-Culuka) when he drank up the ocean to reveal the demons hiding there and aid the gods in a victory over them.
According to the Puranas Agastya happened upon his ancestors’ spirits (pitris) hanging upside down on a limb. They told him that they were in this condition because the proper death rituals were not being performed and that he must bear a son to carry out his duties to his ancestors. So he created a baby girl from all the beautiful parts of the beings of the forest and placed her in the king’s palace. And when she was of marriageable age, he asked the king to give her to him in marriage. So he married Lopamudra. He lived with her in a her­mitage south of the Vindhya mountains. The myths about him include stories of how he ate the rakshasa (demon) Vatapi, how he stamped down the Vindhya mountains, how he cursed the god Kubera, how he set the asuras on fire, how he made Indra send rain, and many more. The rakshasas of South India were said to be in fear of this great sage. Rama visited his hermitage, and Agastya became his friend, advisor, and ally. He gave Rama the bow of Vishnu. And when Rama returned to Ayodhya, Agastya joined him there as one of his priestly advisors.
In the epics and Puranas Agastya was also celebrated as one of the greatest writers of sacred literature. Agastya was said to have been an author of every­thing from Vedic hymns to texts on medicine, but it was as the father of Tamil literature and science that he was most important in the south. There are tem­ples in modern Tamil Nadu in which Agastya worship is still practiced.