ANASUYA, Mahasati Ansuya – A Heroine and Role Model for Women 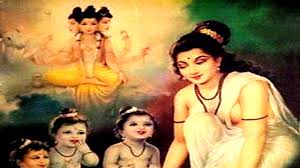 Anasuya was the wife of the sage Atri. As with all major figures in later mythol­ogy, her lineage was completely spelled out: granddaughter of Svayambhuva- Manu (Manu of his Yuga) and his wife Satarupa; daughter of Kardama-prajapati (progenitor of his age) and Devahuti.
Anasuya (charity) was famous for the power of her austerities (tapas). Once Anasuya used her powers to bring rain when there had been a continuous drought; even the Ganga had dried up. Another time Anasuya changed ten days into night to help the gods. And when Sita was drawn by her austerities to the forest hermitage of Anasuya and Atri, Anasuya was able to give Sita an ointment (created by austerities) that gave Sita eternal beauty.
Anasuya played an important role in the story of Shilavati’s curse, which prevented the sun from rising. (See entry under Aruna.) The gods asked Anasuya to help, so she convinced Shilavati to remove her curse and allow the sun to rise. Anasuya was given a boon, which she used to have sons born of the Trimurti (Brahma, Vishnu, and Siva). Anasuya thus became the mother of Dattatreya, Durvasa (famed for both his psychic powers and his bad temper), and Candra. Her sons were partial incarnations of Brahma, Vishnu, and Siva.