ARJUNA, Arjuna Story in English – A hero and warrior 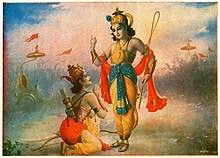