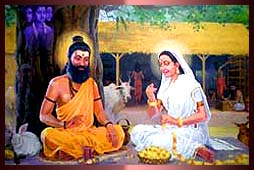 Brahma had six manasa-putras—sons created from his mind. Atri was one of them. The other five sons of Brahma are Marici, Angiras, Pulastya, Pulaha, and Kratu. Another version of the manasaputras increased the number to seven, or the seven sages (sapta-rishis).
Atri married Anasuya, and they had three sons, Soma (or Candra), Durvasa, and Dattatreya. Atri was also known as the author of a part of the Rigveda. His story is told at more length in the entry on Anasuya.