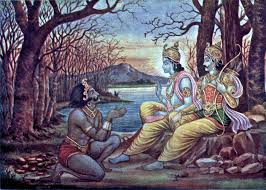 Baa lived in Atala (one of the seven hells), teaching ninety-six kinds of magic to trouble the devas (divinities). Out of one of his own yawns, he created three women with the power to entice whomever they wanted. These three women had an aphrodisiac called hataka. They gave hataka to men and enjoyed them as long as they liked—and then would abandon these poor mortals, drained of their energy.
In a battle with Indra, king of the devas, Bala defeated him. Indra “took refuge in Bala” and glorified him with the highest praise. Bala fell into Indra’s trap by asking Indra what were his wishes. Indra said that he wished for Bala’s body. Bala then gave his body to Indra, because he had given a boon and would keep his word. Bala’s body was cut into pieces and thrown about. Wherever these pieces fell, they turned into gold mines (some accounts say diamond mines). This was the result of Bala’s merit for honoring his promise to grant Indra’s request.
After the death of Bala his wife Prabhavati went to the teacher of the asuras, the acarya Sukra, in an attempt to bring her husband back to life. Shukracharya said that he was unable to do so but was able to bring back Bala’s voice. And it asked Prabhavati to leave her body and join him. Prabhavati immediately abandoned her body and joined Bala. She thus became the river Prabhavati, for posterity.
Bala-Rama plays with his younger, dark-skinned brother Krishna. They are both avatars of Vishnu.