BHAIRAVA – An attendant of Siva 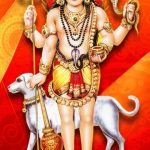 Bhairava (the terrible) is a popular Tantric deity of the type scholars like Wendy Doniger classify as hot, or nonorthodox. Once, overcome by pride, Brahma the creator insulted Siva. Out of the fire of Siva‘s anger Bhairava was born. Instantly Bhairava rushed at Brahma and pinched off the fifth, or crowning, head of Brahma. Siva turned Bhairava into the damanaka, or tatiri tree. But Siva was technically guilty of taking the life of a brahmin (brahmahatya) by cutting off one of Brahma’s heads. So in expiation of that sin, he—some say Siva, others say Bhairava—had to become a begging ascetic carrying a skull (Brahma’s fifth head). Some accounts gave Bhairava a self-created female assistant for his journeys, named Brahmahatya. (These versions point to left-handed Tantric practices that require a female assistant.)
At last Bhairava—some accounts say on the suggestion of Siva—went to Varanasi (modern Benares) and took a bath in the Ganga. This washed away his sin. He left the fifth head of Brahma there, and that place became a famous pil­grimage place named Kapalamochanatirtha (skull-liberating ford). The Kapalikas copied Siva’s austerities as naked ascetics devoted to Bhairava, carrying a skull as their begging bowl. Bhairava’s sacred tree (the damanaka, or tatiri) is still worshipped because of its association with Siva as Bhairava.
Iconographically, Bhairava is horrific, adorned with snakes and symbols of Siva, such as a crescent moon and matted hair. His weapons are the sword, arrow, bow, dagger, trident, and rope. He can have five faces and is often clothed, if at all, in an elephant skin.