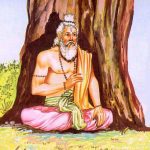 Bharadvaja was the son of Maharishi Atri. He lived thousands of years, years that he used for the study of the Vedas. He was a disciple of the great Valmiki. Many Vedic hymns are credited to Bharadvaja’s authorship.
When Rama was beginning his exile, he went to Bharadvaja’s asrama and was blessed by him. Later when the great king Bharata visited with a huge ret­inue, Bharadvaja used his powers as a magician and called the architect of the gods,Visvakarman, to arrange a banquet, with dishes of food floating down from heaven and entertainment by some of the most famous celestials—devas, gand- harvas, apsaras, and ashthadikpalas.During the time when Vishnu was incarnate as Krishna, Bharadvaja had a momentary liaison with the great temptress, Ghritaci. This famous apsara gave Bharadvaja a brahmin-warrior son, Drona. Drona was the great archery master of the Bharata war, training both Pandavas and Kauravas.