Home Hindu Mythology BHIMA – One of the Pandava brothers, a hero of the Mahabharata War

BHIMA – One of the Pandava brothers, a hero of the Mahabharata War 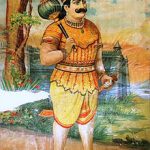 Bhima (the terrible) was the product of his mother’s union with Vayu, the wind god. (For more details see Kunti.) Bhima had a terrible temper but was coura­geous and a great warrior. He was the Pandava brother with the most strength and appetite. He would eat half of the family’s food. During the first exile from the Pandavas’ lost kingdom, Bhima saved the family from a burning house and subdued asuras (demons) to stop them from molesting humankind. After defeat­ing the demon Hidimbha, Bhima married the demon’s sister Hidimbi as his sec­ond wife. Bhima enjoyed a memorable honeymoon of a year, aided by Hidimbi’s magical ability to fly to the mountain tops. So by day Bhima honeymooned with Hidimbi, and each night he returned to be with the Pandava brother’s joint wife Draupadi.
Bhima had vowed to avenge the humiliation of Draupadi caused by Duryodhana. He finally kept that vow on the battlefield of Kurukshetra. However, Bhima had to resort to an unfair blow from his war club, which crushed his cousin’s thigh, and then he kicked his despised foe brutally as he lay wounded. His brothers had to pull him away. That blow earned him the title of an unfair fighter, a blot on his honor as a warrior.
Despite one episode that tarnished his record, more than a hundred stories made Bhima an example of raw courage and strength, fighting to follow the way of a righteous warrior.
After the end of the Mahabharata war, he followed his elder brother Yudhishthira on the final journey to Kailasa (heaven). Nevertheless, he died on the way and was waiting for Yudhishthira when he finally got there.