BHRIGU – A sage, son of Brahma 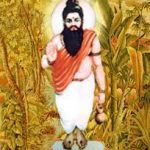 There are many versions of Bhrigu’s birth. Depending on the account, Bhrigu was born as one of the maharishis or as a demon (asura). One account said that he was the son of Brahma, born of Agni at a sacrifice (Brahma-yajna) presided over by Varuna as the chief priest (hotri). In yet another Bhrigu was born from Brahma’s skin. And still another account said that he was born of Manu and then sired the greatest of sages and rishis, the class of Bhargavas, called the Bhrigu- vams’a (Bhrigu’s family). Nevertheless, he was one of the grandfathers (Prajapatis) of a minor class of gods, the Bhrigus, with a family from each of his births, and he started at least two different family lines, one from Brahma and a second from Varuna.
Bhrigu was the officiating priest (hotri) at Daksha’s sacrificial feast, to which Siva was not invited. Sita cast herself into the sacrificial fire because of the humiliation she felt that her husband was not invited, which implied that he was not worthy to attend. In anger Siva produced two demons who avenged the loss of his wife—either pulling out the beard of Bhrigu or, according to another account, killing all the officiating priests, including Bhrigu.
Bhrigu was used often in the Puranas in myths about psychic powers and the curses that sages would put upon evil kings and demons. Bhrigu’s most famous action was his curse of Siva, whom Bhrigu condemned to be worshipped as a linga (a phallus). Siva had killed Bhrigu’s wife Puloma to end her ascetic practices (tapas) in support of the demons. In Bhrigu’s mouth was put an anti- Shaivite proclamation: that no one who was pious or respectable would ever worship Siva—only Siva’s linga.