BRAHMANDA – A cosmogonic principle in the Rigveda 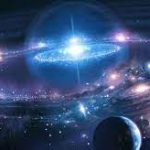 Brahmanda, or the egg of Brahma (immensity), may have been the subject of an entire book describing a creation myth, the Brahmanda Purana. But it is no longer extant, existing only in fragments of other works. The description of the origin of the universe as a golden egg appeared in both Vedic and Puranic literature.
In the beginning there was nothing but the golden egg in space alone. From it was born the Cosmic Person (virat purusha), whose different body parts became the different planets and the four castes (varnas).