BRAHMIN (ALSO BRAHMANA AND BRAHMAN) – One of the four castes 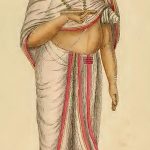 The Rigveda described the origin of the four castes from parts of the cosmic per­son, Virat Purusha. The Manusmriti (the law code of Manu) said that the four castes where born from different parts of the body of Brahma. Brahmanas (brah­mins) were born from the face, ksatriyas from the arms, vaisyas from the thighs, and sudras from the feet of Brahma. The place one found in this hierarchy of privilege ordained by birth was founded on the actions one had done in previous lifetimes, that is, on one’s karma.
The duties of a brahmin include performing sacrifices and learning and teaching the scriptures. A brahmin was also called a dvija, which means twice born; members of the upper castes were seen as being born a second time when they were invested with the sacred thread at the upanayana (the sacrament con­cerning one’s spiritual birth).