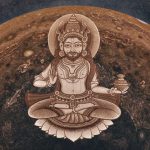 Brihaspati was the teacher of the devas (gods). He was born of Angiras and Vasudha (or SSraddha). Angiras was the son of Brahma, the creator, who had lost his seed in the sacrificial fire at the sight of a celestial maiden. Sage Brihaspati was also identified with a celestial star or planet, Jupiter. In the Rigveda there was a god of this name (also known as Brahmanaspati).
The sage Brihaspati was married to Tara, who was unusually beautiful. Con­sequently Tara was abducted by Soma (or Candra, the moon), and that resulted in a war known as Tarakamaya. Rudra and the demons were on one side with Soma, and Brihaspati and the gods led by Indra were on the other. Brahma finally restored Tara to her husband. However, she was with child. Both Soma and Brihaspati claimed the child, who was named Budha (planet Mercury). Finally, Tara said that the child was fathered by Soma.
There are many other late tales of Brihaspati where he appeared as a rishi (sage). One sectarian episode in the Padma Purana has him turning asuras (demons) into Jains and Buddhists. His character was totally reversed in the storythat told of his rape of his brother’s wife, Mamata, and his cursing of the unborn child in her womb (Dirghatamas) with blindness.