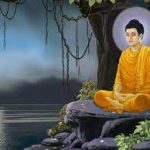 In some accounts one of the ten incarnations of Vishnu was as the Buddha. Vishnu came to earth in order to delude those who already deserved punishment for their bad deeds (karma). Deceived by the Buddha’s false teachings, these indi­viduals renounced the Vedas and ceased to do their duty (dharma). They were then punished in hell or by inferior births.
In a number of later texts, this Buddha avatara was given a positive purpose. Vishnu was said to have chosen the incarnation as the Buddha in order to teach nonviolence and compassion to humanity.