CANDAKA – A hunter and an ardent devotee of Siva 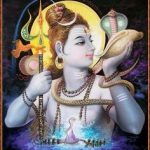 While hunting in the forest one day Candaka saw a Siva temple in ruins. He reported the dilapidated condition of this temple to Simhaketu, the king of Panchala. After consulting the scriptures, Simhaketu allowed Candaka to install a (Siva linga, the phallic symbol of (Siva, and said Candaka could start worshipping it on one condition: that he smear himself with the ashes from the nearby cre­mation ground. Candaka and his wife Pulindi worshipped the linga for a long time. Then one day Candaka did not have any ash and hence could not worship. At this point Pulindi suggested that she should become the ash that Candaka would wear so that he would not have to interrupt his worship (bhakti, puja). Candaka agreed with great reluctance. Pulindi burned into ash, and Candaka per­formed his worship of Lord SSiva. When he finished, to his utter surprise Pulindi regained her life and stood before him. A celestial chariot came from SSivaloka (Siva’s realm) and took both of them to heaven.