CANDRA – The moon, a deva 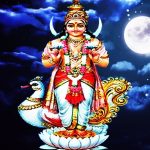 In the Vedic period Candra, the moon, and Soma, the entheogenic plant, were connected by associations (bandhus) in the early hymns. However, Candra was not one of the adityas with Surya (the sun), but was one of the eight Vasus with Vayu (the wind). By the Puranic period Candra’s very essence had changed to that of just another Vedic deity to use as a bad example in the self-elevation or pride of medieval priests.
Candra’s highest birth in the myths was as an emergence from the Churn­ing of the Milky Ocean (kshirabdhi-mathanam). He was also described as the son of the sage Atri and Anasuya. Other accounts said his father was Dharma. The Brihadaranyaka said that he was not a brahmin at all but a ksatriya. These inconsistencies were usually explained away by using the notion of different births in different yugas (world ages) or manvantaras (world cycles). But his essence had become something that did not need a worthy lineage—he had been transformed from a companion of Soma, at the very center of Vedic religious experience, to a marginalized seducer of the wife of a great brahmin sage. (The story of Tara illustrates the Puranic mentality of defaming its heroes and hero­ines, since some accounts make her a willing participant in adultery and others exonerate her and present her as one of the pancakanaya, five perfect women.) This episode had a strange ending: the usual seducer of brahmins’ wives, Indra, acted as the defender of moral duty (dharma) and fought great battles with Can- dra. Candra was finally given the son of his misdeed—the beautiful star-child born to Tara was Budha (the planet Mercury).
The Devi Bhagavata contained a fragment of what could be an older myth of the moon. Candra was said to have married the twenty-seven daughters of Daksha, a progenitor. His twenty-seven wives were the twenty-seven brightest stars of the Vedic sky. However, the Puranas used his plural marriage to make Candra an example of a bad husband. When twenty-six of Candra’s wives com­plained to their father Daksha that Candra loved Rohini more than the rest and did not give them enough recognition, Daksha asked Candra to love his wives equally. Candra did not obey, so Daksha cursed Candra: he would suffer various diseases and would lose part of his body for fourteen days every month. That curse accounted for the waxing and waning of the moon.