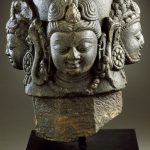 After creation of the world, the five-headed Brahma was resting and thinking about the next creation when a beautiful woman appeared before him. Even though she was born of him, Brahma became attracted to her and let his passion go. For this sin one of his heads broke off. He went to Sthanu tirtha, one of the famous pilgrimage sites on the Sarasvati River. Undoubtedly punning, the myth made Brahma construct a linga with his own four faces (thus the catur-mukha- linga) from the fifth head that had broken off. Worship of the linga absolved
Brahma of his sin, just as it would for pilgrims coming to Sthanu tirtha to wor­ship that shrines’ linga.