CITRALEKHA – Daughter of the demon Bana 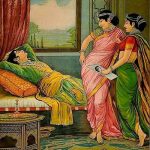 This little story has great popular appeal. One even finds it alluded to or even added as a scene within modern Indian films or video serials.
According to the Bhagavata Purana Chitralekha had an unusual ability to draw portraits. She drew one from an account of a dream that Usha, a princess, gave. The portrait actually was the picture of someone whom Usha was yet to meet. Usha fell in love with the portrait and then discovered that it was Aniruddha, grandson of Krishna. Later, when Aniruddha was brought to Usha’s room and saw his own picture, he too fell in love with her, and they were married.