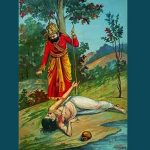 To be so great a figure as to have a god born as one’s son, one must have a dis­tinguished lineage, excellent karma (based on what one had done in past lives), and a record of devotion and service to the gods. All of these elements were pro­vided in the various episodes about King Das’aratha. Various compositions and retellings of the Ramayana nest one myth within another, to the great delight of Indian audiences throughout the centuries. There were enough blessings and cursings, magical powers, and divine visitations reaching into the future and turning back into the past to fully satisfy. Several episodes must suffice to illus­trate these rich myths: a curse from the king’s youth, great deeds and a boon to one of his wives, temple worship and austerities for a son, and death by a pre­dicted curse.
Once while he was hunting, Das’aratha heard a sound from the river that was similar to the sound of an elephant drinking water. Das’aratha, without thinking, shot his arrow, only to discover that he had mortally wounded a brah­min boy collecting water for his aged parents. Sravana, the young boy, asked Das’aratha to take water to his parents at their hermitage, since they did not have anybody else to help them. Das’aratha took the water to the hermitage and told the aged parents about the accidental death of their son. They asked Das’aratha to take them to their dead son. They made a funeral pyre for Sravana. Then the aged parents cursed Das’aratha to die from the loss of his own children. Then both parents jumped into the funeral pyre of their son and died.
Years passed. The devas (gods) asked for Das’aratha’s help in their battles with the asuras (demons). During this service to the gods one of his three wives, Kaikeyi, twice saved his life on the battlefield and gained two boons, which she was to use much later. Years and episodes rolled by. Das’aratha and his wives remained childless. He entrusted his kingdom to his ministers and began to prac­tice devotion by building a temple and worshipping an image of Lord Vishnu. He also gained the help of an ascetic named Rishyasringa, who performed the magic incantation for children (putrakameshthi). From the sacrificial fire and the chanting (mantrayana) a luminous figure arose with a pot of pudding and placed it before Rishyasringa. He gave it to the king with more mantras. According to Rishyasringa’s instructions King Das’aratha gave a portion to each of his wives: half to Kaushalya, who conceived Rama, a half incarnation of Vishnu, a fourth to Kaikeyi, who conceived Bharata, a one-fourth incarnation of Vishnu, and a fourth to Sumitra, who conceived two sons, Lakshmana and Satrughna, each a one-eighth incarnation of Vishnu.
Years passed. The sons married, and Das’aratha was prepared to pass his kingdom to the son of his first wife, Kaushalya’s son Rama. Now the boon to Kaikeyi had its karmic unfolding. She demanded that her son, Bharata, be crowned king and that Rama be exiled for fourteen years to the forest. Thus, all this was nested in the Rama myth cycle, which in turn nested within the Vishnu myth cycle.
However, Das’aratha’s story must be brought to an end. It was because of the curse of the brahmin boy’s parents that Das’aratha died of intense sorrow after exiling Sri Rama to the forest. Sri Rama and Lakshmana along with Sita would have to spend fourteen years in exile because of Das’aratha’s deeds (karma).