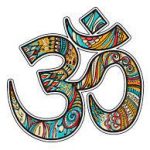 (1) A deva (god)
In the Vedas, Dharma was a metaphor, a personification of duty. In later periods, however, Dharma was presented as a minor deva. Dharma was said to be born from the right nipple of Brahma, the creator. In the Mahabharata Dharma was given three sons: Sama, Kama (god of love), and Harsha. In the Puranas Dharma married thirteen daughters of Daksha-prajapati: Sraddha, Lakshmi (later to be given to Vishnu), Dhriti, Tushti, Medha, Pushti, Kriya, Buddhi, Lajja, Vapus, Santi, Siddhi, and Kirti. Famous sons of Dharma were Hari, Krishna, Nara, and Narayana. Hari and Krishna were great yogis, and Nara and Narayana were great ascetics.
Dharma partially incarnated as Yudhishthira, eldest of the Pandavas and son of Kunti, when she received the boon of having children by different gods. In one account, Dharma was reborn a mixed-caste human as Vidura, with the brahmin Vyasa as his father and a sudra slave girl as his mother.
See also Brahma; Kama; Kunti
(2) A concept
This concept plays a major role in both Hindu mythology and religion. The word itself came from the verbal root dhri, meaning “to sustain, support, uphold.” The older concept used in the Rigveda is neuter in gender, dharman. But the form of the word used in the following periods of mythology was masculine,
dharma.
There is no single word for religion in Sanskrit, perhaps because that realm was so pervasive. The term dharma encompassed truth, tradition, teaching, right action (ethics or morals), correctness (ought), duty, and obligation. It had cosmic and social dimensions.
Its oldest connections were with the Vedic concept rita, the sustaining order presided over by Varuna. That connected to truth (satya) and proper action. Dharma developed within the tensions of Varuna’s rita and satya, Brahmanical (priestly) ritualism, and kshatriya (warrior) codes of ethics (honor, courage, and loyalty). The myths demonstrate this tension in the struggles between gods and demons, gods and humans, and gods and priests. Justice (rita) and truth (satya) was universal but it was articulated indirectly in stories of misunderstandings, failures, and conflicts.
Perhaps the most important connection was between dharma and the social system, comprising two aspects, asramas (stages) and varnas (castes). These three, as asrama-varna-dharma, became inseparable for orthoprax Brahmanical society. For a more general discussion see the entries in Chapter 1, “Hindu Worldviews” and “Dharma.”