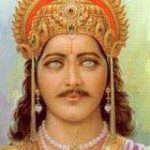 The lunar dynasty was in danger of dying out. Dhritarashthra’s life story is an illustration of just how weak dharma (truth, righteousness, religion) had become on earth. Dhritarashthra was the king under whose rule the great Mahabharata war would be fought. Evil could not be reversed as the great royal lineage fought amongst itself.
Dhritarashthra’s conception compromised the great sage Vyasa who was not married to his mother, his resulting blindness disqualified him from being cho­sen king until there was no other choice, and his own past karma placed him on the wrong side of the Mahabharata war. His story is nested in the actions of his grandfather, his conception in his dead father’s name by a substituted mother (and thus creating a glaring problem in the logic of his geneology), and his own past actions. It is Hindu mythology at its best and most complicated—the use of stories nested within stories illuminating right action through bad examples.
Dhritarashthra’s grandfather, King Santanu, had sons by two wives, Ganga and Satyavati. Ganga had been reborn on earth as part of a curse by Brahma for exposing herself in heaven on one occasion. Ganga threw seven of her eight sons into the earthly river Ganga and gave her eighth son, Bhishma, to Satyavati to raise alongside Satyavati’s own two sons, Citrangada and Vicitarvirya. Bhishma took the vow of chastity (brahmavrata), so his half-brother, Citrangada, was enthroned as the king. But he was killed on a hunting expedition by a gandharva.
At this point storytellers could provide their audience with an adult or a children’s version. Vicitarvirya was appointed king. Bhishma abducted three princesses from a neighboring kingdom. He sent one sister back and gave the other two, Ambika and Ambalika, to Vicitarvirya. Unfortunately Vicitarvirya also died before any children were born. The queen mother, Satyavati, solved the crisis of an heirless throne by remembering that she had had a child by a brah­min named Parashara before she married King Santanu. This son was none other than Veda-Vyasa. Satyavati brought Vyasa into the palace and sent Ambika and Ambalika, one after the other to Vyasa so that they could produce heirs to the throne. However, they were shocked by this rustic, according to polite accounts, because he wore bark for clothes and had matted hair. Ambika was only able to stay with Vyasa by closing her eyes, so her son, Dhritarashthra, was born blind. Ambalika lost all her color when she saw the muni (wild one), and her son was born a leper or, perhaps only an albino, named Pandu. Queen Satyavati’s maid was very happy to be with Vyasa and had a normal and highly intelligent child who later became the great sage Vidura. Having done his duty, Vyasa returned to his hermitage (asrama). The lunar royal lineage had been temporarily saved.
Dhritarashthra was passed over as king because of his infirmity—blindness. Uncle Bhishma helped arrange his marriage to a princess named Gandhari, who just happened to have a boon from (Siva to be mother of a hundred sons. Vyasa was the instrument of Siva‘s blessing. Gandhari had remained pregnant for two years, so she crushed her womb and forced out a lump of flesh. Vyasa cut it into a hundred pieces and kept them in butter (ghee) pots. Duryodhana was the eld­est son of the one hundred.
Pandu had become the king, but he was cursed by a hermit and died in the forest. Yudhishthira, his eldest, became king but later lost the kingdom in a dice game with Duryodhana. The Pandava brothers and their joint wife, Draupadi, were forced into exile and, after the agreed upon thirteen years, returned to claim the kingdom. However, Duryodhana would not return anything. So the hundred Kaurava brothers led by Duryodhana and the five Pandava brothers and their armies fought the great Bharata war at Kurukshetra.
Dhritarashthra opposed the war and was blessed with a moment’s sight by Sri Krishna and was able to see his cosmic form (Visvarupa). During the battle the sage Sanjaya telepathically reported the events of the Bhagavad Gita to Dhri- tarashthra, who was again blind. After the great slaughter Dhritarashthra and his wife Gandhari retreated to a hermitage near Kurukshetra. Great sages like Narada and Vyasa visited them. Then Dhritarashthra and Gandhari along with the mother of the Pandavas, Kunti, went to Gangadvara and performed severe penance. They died in a wildfire and entered the realm of Kubera, god of wealth and happiness.