EKAVIRA – A king born from horses 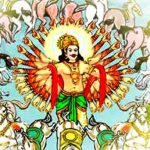 In the days when gods and goddesses changed into horses, and their offspring became human kings, Ekavira was born and founded the Hehayadynasty. The myth began in Vaikuntha (Vishnu’s heaven). A friend of Indra, King Revanta, came to the abode of Vishnu and Lakshmi. Lakshmi was infatuated with the handsome Revanta. She flattered him by complimenting the beauty of his horse. Because her attention was on Revanta, she did not hear what Vishnu was saying. Vishnu became angry at Lakshmi’s behavior and cursed her to be born as a mare. Lakshmi begged for some way to do penance. So Vishnu stated that she would be redeemed from the curse and would get back her original nature once she gave birth to a son that equaled the glory of Vishnu himself. The rest of the myth unraveled this puzzle: how a mare could possibly do that.
Once on earth, Lakshmi prayed to Siva and Parvati for help, which, after a thousand years of her devotion, they promised to give. Siva went to Vaikuntha and sent Vishnu to earth as a horse. Other versions take this superiority away from Ssiva by simply having Vishnu miss Lakshmi and follow her to earth as a stallion. Either way, there was a time of deva-lila, divine play. When a child was born, Vishnu and Lakshmi returned to Vaikuntha, leaving little Hehaya (“born of a horse”—the future Ekavira) alone in the forest. Divine beings, Vidyadharis and Lakshmi-Narayanas, finally got him to the right parent, King Shatajit, who had been praying for a son. He named the infant Ekavira, raised him, and even­tually gave him his kingdom so that he and his queen could retire to the forest and gain heaven. After some years of penance (tapas), they attained Vishnuloka (another name for Vishnu’s heaven).
Ekavira found his wife by retrieving her from hell (patala). He was wander­ing in the forest and came upon a weeping damsel. She told the story of a child­less royal couple who had produced a beautiful daughter by performing a magic ritual (putrakameshthi yaga). They named her Ekavali and planned to marry her to Ekavira, king of Hehaya. However, a demon kidnapped her, and when she would not submit to his desires, the demon Kalaketu imprisoned her in hell. Ekavira went to Patala, defeated Kalaketu in mighty combat, and brought both Ekavali and the damsel who had told him her story, Yashovati, who was really the princess’s lady-in-waiting, back to her father’s palace. The king of Raibhya was so pleased that he gave them both to King Ekavira, who returned to his king­dom of Hehaya and founded a great dynasty there.