Home Hindu Mythology GAUTAMA – One of the seven sages (sapta-rishis)

GAUTAMA – One of the seven sages (sapta-rishis) 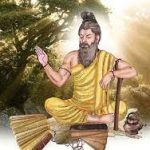 There were references to Gautama’s name in the Rigveda. In a hymn that was later literalized, Indra as a metaphor of the morning carried off night. Indra’s character became that of a seducer of sages’ wives, and Ahalya (“unplowed”), the wife of Gautama, became one of them.
The number of versions of the seduction of Ahalya showed how many ways it could be utilized in Puranic mythology. (For another version see the entry on Ahalya). In a version where Ahalya was innocent, Indra came to the ashrama, was given fruit by Ahalya, and left without harming her. But the old rishi Gau­tama returned, assumed she was guilty, ordered his son to cut off her head, and went back into the forest. Cirakari sat down and pondered dharma (in the form of his duty to obey his father) and karma (in the form of the offense of killing his

Gautama Buddha becomes merely an avatara of Lord Vishnu in order to lead sinners astray with false teachings.
mother). Fortunately, Cirakari was not quick of mind, and his father had time to return in a better frame of mind and bless him for his thoughtfulness.
Gautama was given so many roles of blessings and cursings in the Puranas (cursing Ahalya, cursing Indra, blessing King Kalmashapada, blessing Dyumatsena, and so on) that one might not be wrong in concluding that he was a per­sonification of the complex logic of the curse and the blessing.