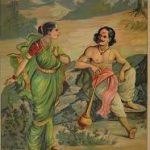 In the Ramayana the tale is told that soon after the Pandava brothers began their forest exile, a rakshasa chief sent his sister, Hidumbhi, to capture them for his dinner. However, Hidumbhi fell in love with Bhima, the strongest and most phys­ical of the brothers. The rakshasa chief came to collect his dinner himself but was promptly killed. Hidumbhi begged Kunti, mother of the Pandavas, to inter­cede for her with Bhima. So the clan allowed their marriage with the condition, that it would only be valid in the forest and the mountains during the day. At night Bhima would return for his turn as husband of Draupadi, the brothers’ joint wife. Ghatotkaca was born to Bhima and Hidumbhi and became a great help both in the forest and later on the Kurukshetra battlefield. During the great war Gha- totkaca proved to be one of the greatest warriors, killing Kaurava allies, including kings on their war elephants, and winning great duels against other heroes. Finally, he was killed by Karna (son of Kunti and Surya), who had to use his mag­ical weapon (vaijayanti sakti) to kill Ghatotkaca instead of using it on Arjuna. Thus Ghatotkaca died a hero’s death. He appeared on the banks of the Ganga with the rest when the souls of the heroes were called from death by Vyasa for the Kauravas’ mother, Gandhari. After death, he lived in the heaven of the Yaksha-devas.