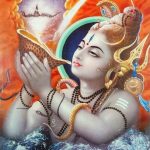 Some accounts stated that halahala had been churned up from the Milky Ocean and absorbed by the nagas (serpents) and became their venom. Other accounts said that halahala was the poison vomited up by Vasuki, king of the nagas, dur­ing the time of the churning of the Milky Ocean. In order to prevent it from falling to earth and destroying everything, Siva drank it. Parvati had to act quickly and pressed his neck to prevent the poison from going inside Siva‘s body. The poison was absorbed in Siva’s neck, which turned blue. Henceforth, he was known as Nilakanta, which means the blue-necked one.