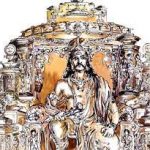 In the Epics kings could be as great as gods. One such king was Haritasva, king of Ayodhya. He was greatly accomplished in the arts. He surpassed the sage Narada and the goddess Sarasvati in music. He pleased Brahma with his music and put Vishnu to sleep. Once Siva was competing with Haritasva and played a particular raga, a musical piece, called sankarabharana, dedicated to Lord Siva. Haritasva pointed out that instead of the santa rasa, the emotion of peace, it should be played in raudra rasa, the emotion of anger. Siva became furious and opened his third eye at Haritasiva. Gods like Kama had been burned to ashes by Siva’s third eye. Haritasva, however, was not intimidated because he knew that he was right. Siva was pleased with his excellence and courage and blessed Hari­tasiva with wealth and prosperity.
A greater test came later. The gods were being abused by a great demon, Andhaka-asura. He conquered heaven (svarga) against the combined efforts of the Trimurti (Brahma, Vishnu, and (Siva). Brihaspati, priest of the gods, advised them to get help from King Haritasiva. Agastya, a great rishi of superhuman pow­ers, told Haritasva that the demon was protected with images of Siva and Parvati in his belly. Consequently, Haritasiva fired his arrows at Andhaka-asura‘s belly, removing his protection, and killed him. That was how a king restored Deva- loka (svarga) to Indra (king of the devas) and the gods