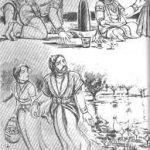 In this late myth in the Padma Purana, Kubera, god of wealth, is portrayed as a devotionalist (bhakta). He had a wonderful garden with beautiful flowers that he used in temple worship each day. One day his gardener, Hemamali, came back from a visit to the lake of the gods, Manasasaras, filled with love for his beautiful wife, Visalakshi. He forgot all about his duty to get flowers to Kubera for his worship. Kubera waited all day at the temple, but Hemamali was sporting with his wife. Kubera became very angry and summoned Hemamali to his palace. Hemamali apologized and told the truth. Kubera placed a curse on Hemamali: that he would become a leper. Then Kubera expelled Hemamali from Alakapuri, Kubera’s heaven.
Hemamali met the sage Markandeya, to whom he told his sad story. The sage advised him to observe a specific kind of fasting with mantras, called asada Krishna ekadashi (worship of Krishna to remove a punishment). Hemamali observed the ekadashi and was cured of leprosy. From his tapas (austerities) he again gained Devaloka (heaven).