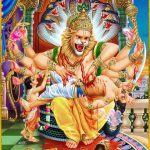 Hiranyakasiipu was a worthy opponent of Lord Vishnu, born repeatedly, which necessitated multiple incarnations of Vishnu to conquer this powerful asura and restore dharma (righteousness) to earth. A demon of this magnitude would have quite a lineage and an appropriate source of his tremendous powers. There was a time before the life when he had this name when he was the very doorkeeper (dvarapalakas) of Lord Vishnu at Vaikuntha. His name in that previous birth was Jaya. His elder twin brother was Vijaya, also a doorkeeper. One day a group of hermits led by Sanaka came to Vaikuntha to see Vishnu. They were stopped by Jaya and Vijaya. But the sages took offense and cursed the doorkeepers to be reborn three times as demons (asuras). The frightened doorkeepers begged the angry brahmins for forgiveness, but they only slightly lessened the punishment: after three births, they would be redeemed by the weapon of Lord Vishnu.
Accordingly, the twins were reborn on earth as twin demons, Hiranyakasiipu and Hiranyaksha, who came from the womb first. Their first earthly parents were Kasyapa-Prajapati and his wife Diti. After Hiranyaksha was killed by Lord Vishnu in his Vamana (boar) avatara (incarnation), Hiranyakasipu did austerities (tapas) in order to increase his strength and get revenge. He was so good at ascetic disci­plines that he earned boons from Brahma and immediately conquered the three worlds. He was crowned Triloka Chakravarty (emperor of the three lokas [worlds]). He prevented everyone from saying Vishnu’s name or even thinking about him. He instituted his own worship with the mantra Hiianyaya namah (salutation to Hiranya). However, his son, Prahlada became a devotee to Vishnu and chanted Narayanaya namah (salutation to Narayana, in other words, Lord Vishnu). Hiranyakasiipu was killed by the Narasimha incarnation of Vishnu (as man-lion).