ILA – Daughter of Vaivasvata-Manu and Sraddha 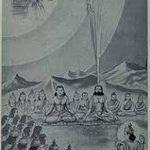 myth of Ila is about the plasticity of gender, with Ila moving back and forth between male and female in the same lifetime. Ila’s father, Vaivasvata-Manu, was the son of Kasiyapa prajapati and Aditi, the first parents in this myth. Her sons were all celestials and divine (adityas) yet she was a mortal—this is one of the inconsistencies of Puranic myths.
Ila’s parents, Vaivasvata Manu and Sraddha (trust), did not have children for a long time, so they asked Sage Agastya to perform a yajna (sacrifice) to Mitra and Varuna for a son. However, a mistake was made in the ritual, and they received a daughter instead. They named her Ila (some versions say Ida). They propitiated Mitra and Varuna, and Ila’s sex was changed. Consequently, they named their son Sudyumna. But cbecame displeased and changed Sudyumna back into Ila. At this point Ila married Budha (the planet Mercury) and gave birth to a son named Pururavas. Then by pleasing Vishnu, Ila was again changed into Sudyumna, married, and became the father of three sons.
There is another version that reverses all this. Vaivasvata-Manu and Sraddha did the sacrifice and received a son whom they named Ila. However, young Ila angered Parvati by trespassing in her sacred grove, so she turned him into a girl Ila. After many prayers of supplication Siva and Parvati changed the pun­ishment to one month as a female followed by a month as a male for the remain­der of that lifetime.