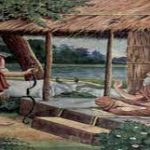 Jamadagni was born by a miraculous birth in which his caste was determined not be birth but by a magical portion of rice pudding. His father, the sage Ricika, a wonderous and powerful magician (siddha) gave his two wives different por­tions to determine the qualities of his future sons. Satyavati switched her por­tion with the second wife and her son, Jamadagni was born with the qualities of a warrior (kstriya) but the caste of his brahmin father.
Jamadagni studied hard and mastered all the Vedas. Then he went to King Prasenajit (also known as Renu) and demanded to be given his daughter in mar­riage. The king gave him the princess Renuka without complaint. Thus, she went to Jamadagni’s hermitage to a life of austerities and bore Jamadagni five sons, the youngest being Parasu-Rama. (See more about her temptation and pun­ishment in the entry on Renuka.)
One day Jamadagni became furious with his wife when she was late with his meal because she had been watching love play at the bathing ghat. So he ordered his sons to kill her. Only the youngest, Parasu-Rama, a lad of fourteen, obeyed and cut off his mother’s head with an ax (some versions said with a cutting arrow). The other four sons were cursed to become imbeciles by the old brah- min-warrior Jamadagni. He was so pleased with Parasu-Rama that he granted him a boon. Parasu-Rama asked that his mother be restored to life completely purified of all sins and that his brothers become normal again. Later King Kartaviryarjuna and his hunting party came to Jamadagni’s her­mitage and asked for hospitality. Jamadagni called his divine cow Sushila, and she immediately provided a feast for the king and his huge retinue. Unfortu­nately, however, the king never forgot about this cow. There are a number of ver­sions of what happened next. In one, the king tries to give a thousand cows for Sushila but finally, tired of being rebuffed, he (or his minister) stole the divine cow and her calf, leaving Jamadagni for dead.
In another account, Renuka gave King Kartaviryarjuna food and drink at the hermitage. Kartaviryarjuna then destroyed their grove of trees and stole the divine cow. But in each version, Parasu-Rama went after the cow, met the king and his army in battle, and killed them all. In a longer version his wounded father, Jamadagni, sent Parasu-rama to Mahendragiri to do penance for killing so many people. And while Parasu-Rama was away, King Kartaviryarjuna’s youngest son came with an army and murdered the old brahmin Jamadagni. His sons and disci­ples built a funeral pyre and began the proper rituals. At this point Renuka jumped into the fire of her husband, committing sati (suttee) by dying in the flames.