Skip to content
Home Hindu Mythology JAMBUKA, JAMBUMALIKA – A sage who was a Sudra in the Uttara Ramayana

JAMBUKA, JAMBUMALIKA – A sage who was a Sudra in the Uttara Ramayana 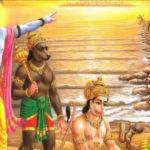 Jambuka’s ascetic practices threatened the very foundations of Rama’s perfect rule as king (ramarajya). Jambuka was a Sudra who had adopted spiritual exer­cises (tapas) that he was not entitled to practice.
Rama had returned from twelve years of exile, and his rule in Ayodhya seemed to fulfill dharma (righteousness) in every possible way. Then one day a brahmin and his wife brought their dead child to the king’s court. It did not seem possible that there could be a child-death during a ramarajya. The know-it-all sage Narada pointed to a breach of varna-asrama-dharma (social duties): there was a Sudra sage in the land practicing tapas. Narada stated that such a thing was adharmic and that it had caused the child-death. King Rama left his brother to take care of funeral rites for the child and a trusted minister to act in his place against possible invasions. Rama personally searched for this sage until he finally found Jambuka. When questioned, Jambuka told the king that he was hanging upside down from the limb of a tree until he bodily went to heaven. Rama solved this threat to social order by immediately cutting off Jambuka’s head with his sword. Then everything was solved. Jambuka achieved liberation (moksha) that very moment and went to heaven. The brahmin child returned to life before he was cremated. And the dharmic order in Rama’s kingdom was restored.