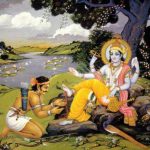 According to one version in the Bhagavata Purana Jara was hunting and shot an arrow through a bush at the sound of an animal. But the blind shot hit (Sri Krishna in the foot, that only area of his body not protected by the magical potion from the sage Durvasa. (For more details of this version, see the entries for Durvasa and Krishna.)
There is a completely different version. The hunter, Jara, was the demon Bali, who had been killed by Rama and in this rebirth killed Krishna in revenge.