Skip to content
Home Hindu Mythology JAYA, JAYAS – One of the dvarapalakas (doorkeepers) of Vishnu

JAYA, JAYAS – One of the dvarapalakas (doorkeepers) of Vishnu 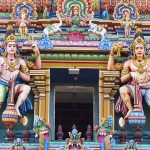 One day a group of hermits led by Sanaka came to Vaikuntha to see Vishnu. They were stopped by Vishnu’s doorkeepers, Jaya and Vijaya. But the sages took offense and cursed the doorkeepers to be reborn three times as demons (asuras). The frightened doorkeepers begged the angry brahmins for forgiveness, but they only slightly lessened the punishment: after their three rebirths they would be redeemed by the weapon of Mahavishnu.
In the first birth they were born as Hiranyaksha and Hiranyakasipu. In the second birth they were born as Ravana and Kumbhakarna, and in the third birth they were born as Sisupala and Dantavaktra. After their three births they returned to Vaikuntha to serve Lord Vishnu.