KACA – The son of the sage Brihaspati 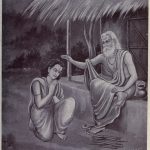 The asuras (demons) had become invincible in war because their priest, the brahmin (Sukra, knew the art of bringing the dead back to life (mritasanjivini). No sooner would the devas (gods) kill the asuras than Sukra would perform the mritasanjivini and they were alive again. The devas dispatched their chief priest’s son, Kaca, to learn this magic. Kaca presented himself so humbly in ask­ing to become his disciple that Sukra could not refuse. Even Sukra’s daughter, Devayani, fell in love with Kaca. They became an inseparable couple. However, the asuras were not happy that the son of Brihaspati was at (Sukra’s asrama (hermitage). One day they had their chance and killed him when he was in the forest looking for stray cattle. The asuras fed his body to wolves. Devayani pleaded with her father to perform the mritasanjivini. Kaca was called back to life, and everything returned to normal, until the asuras killed him again. Kaca was again called back to life. But the third time the asuras killed him, they burned his body, mixed his ashes in (Sukra’s wine, and got Sukra to drink it. Again Devayani pleaded for her lover’s life.
(sukra could think of only one way to save Kaca. He communicated with Kaca in meditation and taught him the magical formula, the mritasanjivini. When Sukra performed it, Kaca came forth from Sukra’s belly, splitting him open. Then Kaca performed the mritasanjivini and restored his teacher to life. Now Kaca knew the magical art and was ready to return to the devas. Devayani was in love with him and pleaded to become his wife. But Kaca rejected her, so she cursed him to not be able to use the mritasanjivini. Kaca cursed her back, saying that no brahmin would marry her. Kaca was able to get around Devayani’s curse by teaching his disciples how to use the mritasanjivini and restore the devas to life. But Devayani had to marry a ksatriya (warrior) because of Kaca’s curse.