KALAVATI – Daughter of the king of Kasi 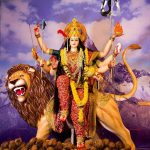 Kalavati worshipped the sage Durvasa and was given the powerful five-syllable mantra (pancakshara mantra) in praise of Siva (sivayahnamah). By its use Kala- vati became a saint.
Kalavati married King Daharha of Mathura. When he approached her, he noticed that he became overheated. Kalavati told him that, because of the mantra, sinners would feel hot if they touched her. The king consented to go with Kalavati to the brahmin Garga. The king bathed in the Kalindi River, and his sins flew away as tiny birds. When they next embraced, Kalavati’s body was cool, and they had a son.