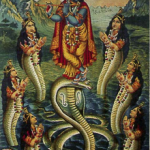 In the Krishna myth cycle Kaliya was a great serpent, born of the progenitor Kasyapa by his wife Kadru, mother of the serpent kingdom. Kaliya lived in the Kalindi River (also called the Yamuna) and was well known because of his asso­ciation with Krishna. Kaliya had a thousand hoods (although some texts say only five). One late version added that Kaliya was reborn as the asura (demon) Kalanemi. While other Nagas (serpents) had made an arrangement not to be eaten by Garuda, the sun eagle, Kaliya and his clan were protected by a boon that they could not be eaten by Garuda as long as they were in the Kalindi. So they gave no offerings or tribute to Garuda.
Kaliya’s poison became so strong that the entire Kalindi River became poi­sonous, and trees along its banks died. One day the cowherds, gopis and gopalas, drank from its water and died. (One version said it was the cows that died.) Sri Krishna became furious and attacked Kaliya. Krishna jumped from a tree upon the head of the giant, multiheaded serpent and danced on his head (the Kaliya- mardhana, dance). Beaten into submission, Kaliya and all his wives and children took refuge in Lord Krishna. Krishna blessed them and sent them to an island kingdom in the sea with the boon that Garuda still could not eat them there. From that time on Kaliya and his clan lived on Ramanaka Island. And of course the dead (gopis or cows) were brought back to life, not by magical formulas or Brahmanical rituals but by the will of Lord Krishna.