KARTTIKEYA – Son of Siva and Parvati, god of war; the planet Mars 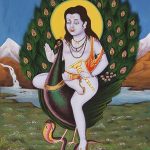 Karttikeya’s name derived from his having been raised by the six Krittikas, the name given to six of the seven wives of the seven maharishis. He was also named Skanda and Subrahmanya.
Karttikeya appeared in the epics, the Mahabharata and the Ramayana, as a son fathered by (Siva without being born from the womb of a woman. Siva‘s seed landed in the fire, and Agni transported it to the river goddess Ganga. But the seed became too hot for Ganga, so Karttikeya was born on the shore in a thicket. From this birth two of his mythic names were derived: Agni-bhu (born of fire) and Ganga-ja (descendant of Ganga). Some versions assigned his birth to Parvati, as Siiva’s principal wife.
He had six heads and was born with the purpose of destroying the terrible demon Taraka, son of Diti. He rode on a peacock named Paravani. His wife was Kaumari, or Sena. He was never as popular as (Siva’s other son, Ganesia. As a war­rior he was called Maha-sena (great conquering army) and Sena-pati (lord of a conquering army); he was also called Kumara (boy—one who is always young), Guha (mysterious one), Sakti-dhara (spear holder), Ganga-putra (son of the Ganga), Sara-bhu (born in the thicket), Taraka-jit (vanquisher of Taraka).