KAUTHUMI – Son of a brahmin 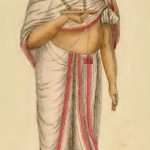 A young Brahmani named Kauthumi, son of Hiranyanabha, challenged the royal priests of King Janaka in debate. But he lost his temper and killed one of them, thus committing brahmahatya (murder of a brahmin). He was cursed and became a leper that very day. After much suffering he followed the advice of his father and used a magical incantation to Surya, the sun god (an incantationknown as the shravya-smajnaka-sukta). He was healed of his leprosy and redeemed from his sin.
This story warrants notice, as it recommended neither Brahmanical rituals (puja) nor devotion (bhakti) but the magical power of secret mantras. Such a myth would appear to be recommending the special role of the teacher (guru) and esoteric knowledge.