KURMA – Second incarnation of Vishnu as a tortoise 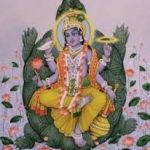 This is one of the richest myths in the Vishnu myth cycle. Its popularity makes it pan-Indian and not just sectarian, even though many versions attempt to prove the ultimacy of Vishnu and his supremacy over Siva. When it is seen as an ori­gin myth, answering the question of how the gods became immortal, this myth also includes a trickster myth, which tells how the gods tricked the demons out of their share of the sacrifices and especially out of receiving the drink of immor­tality (amrita, or amritsa). There are many versions of this myth, as well as many uses of it in other myths, both in the form of references to it and of varia­tions upon its themes.
In the beginning the gods (devas) and the demons (asuras) decided that they must work together in order to obtain the drink of immortality. They needed to bring amrita into being from chaos, thus to bring it up from the primordial ocean. They would have to make a churn large enough to stir the possibilities of existence into being from the Milky Ocean. Vishnu incarnated as a turtle and dove to the bottom of the sea. Upon his back rested the famous Mount Mandara, which would be the churning stick. The serpent Vasuki was used as the churn­ing rope, and the gods and demons pulled back and forth, stirring the ocean and bringing all manner of things into being. Finally, the pot of amrita came to the surface in the hands of the sage Dhanvantari. The asuras took the divine ambrosia from him—and may have even been willing to share it. But the devas had a promise from Vishnu that the asuras would not be allowed to have a share. The demons were tricked out of their share of the drink of immortality by a manifestation of Vishnu as Mohini, a temptress of unusual beauty. Seductively, Mohini coaxed the asuras to allow her to divide it equally among them—but only after they took a purificatory bath. Their trust was misplaced, as Mohini left with the amrita as soon as they went for their bath. And when the devas had fortified themselves with the divine nectar, they were a match for the asuras. The correct order (dharma) having been restored, Kurma’s purpose for incarnat­ing had been accomplished, so he was able to merge back into Vishnu.