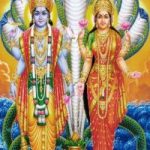 Lakshmi’s multiple importance in Hindu mythology cannot be captured in a few paragraphs. Three perspectives will demonstrate the breadth of her roles and the changes in the ways in which she was perceived.
Linguistically and historically, Lakshmi in the Rigveda was a word of feminine gender that quantified good fortune (the one of hundred thousands). Lakshmi became personified in the later Vedas as the correspondences (bandhu) with the priestly tradition found in the universe. In the Satapatha Brahmana she and Sri were the two wives of the celestial father, Aditya. However, Aditya as father- creator disappeared when aditya became a term for a group of gods, the adityas— the sons of Aditya. Throughout the Vedic period Lakshmi floated from one father to another: daughter of Prajapati, Kshirasagarakanyaka (“churning of the milky ocean daughter”), mother of Kama—usually with a lotus in one hand (padma). By the time of the Epics Lakshmi had become a major goddess. She appeared in the sage Narada’s list of gods and goddesses whom he worshipped, and elsewhere she had become associated with Vishnu as his wife, or as one of his wives.
From this point on, the myths about Lakshmi were imbedded in theological perspectives. In goddess theology (Sakta) Lakshmi was Devi, the mother and source of the universe, supreme energizing and creative energy of Vishnu. In Hindu polytheism Lakshmi was one of the many interesting goddesses with a myriad of stories about her many births and rebirths. In Vaishnava theology Lak- shmi was wife of Vishnu—the Supreme, from whom all exists. Shaiva theology honored Lakshmi as Vishnu’s wife in much the same way as Hindu polytheism. Thus, depending on the perspective, there were many variations of birth, or ori­gin, myths, purpose, or savior, myths, and so on.

Lakshmi appears as Gajalakshmi, goddess with the elephants, giver of all that is good and bountiful in life. Lakshmi’s birth in the Devi Bhagavata Purana was from the Supreme Being’s left side. Then she divided herself again into Lakshmi Devi and Radha Devi, each wedding different aspects of Vishnu to herself. Then in each incarna­tion (avatara) of Vishnu, according to the Vishnu Purana, Lakshmi also incar­nated: at the churning of the Milky Ocean as Padma, in the dwarf avatara as Kamala or Padma, in the Parasu-Rama incarnation as Dharani, in the Rama avatara as Sita, in the Krishna avatara as Rukmini. In all other descents, she was there as well. From this perspective Lakshmi’s story would be found nested in the story of Vishnu’s incarnations.
There were stories from perspectives that suggest that Lakshmi was appro­priated by Saivas. These fragments could be explained from any perspective, but they are worth mentioning to suggest her role in situations other than that of being Vishnu’s wife. Lakshmi cursed Mahavishnu to have his head fall off; she stayed in the court of Kubera (god of wealth) and also in the court of Brahma, and then as the goddess Sri, saying that she was only Lakshmi, not Saci (a wife of Indra), and that she had left Bali for Indra. The stories about Lakshmi courting kings may have been responsible for a division of Mahalakshmi (Great Lakshmi) into two forms: a chaste and virtuous Vishnu-priya-Lakshmi and a flirtatious Rajya-Lakshmi. But a curse was used to explain why she lived with or was the wife of so many different gods.
As the goddess of wealth and plenitude, Lakshmi is worshipped in temples and homes in many forms, such as Gajalakshmi (a river goddess) or Dhana- lakshmi (giver Lakshmi). Her images almost always hold a lotus (padma) in one hand.