LANKA – A city; an island 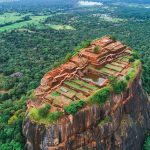 In the Ramayana the story is told that Brahma gave Lanka to Kubera, god of wealth. Celestial architects Visvakarman and Maya together designed this celes­tial city and built it of gold. Its first location was on the top of Mount Trikuta, a peak of Mahameru (great Meru). However, in a fight between Vayu, god of wind, and Vasuki, king of the Nagas, the entire peak, including the celestial city, was broken off and knocked into the sea, becoming Lanka.
Ravana defeated his half-brother Kubera and ruled Lanka for many years. When Ravana abducted Sita, it was to his island kingdom that he brought her.LANKA-LAKSHMI
The doorkeeper at Ravana’s palace
The Kamba Ramayana’s account of Vijaya-Lakshmi and the story of the Jaya and Vijaya from the Bhagavata Purana are mirrored copies of each other. Lanka- Lakshmi had been Vijaya-Lakshmi in her previous lifetime. As Vijaya-Lakshmi, she had been a negligent doorkeeper at Brahma’s palace. So Brahma cursed her to be reborn as the doorkeeper of Ravana. Brahma told her that she would be released from the curse and would return to heaven by the touch of Vishnu. Some accounts take the mystery out of the story by giving away the entire end­ing: Hanuman, a partial incarnation of Vishnu, was destined to fulfill the condi­tion of her release.
Thus, Hanuman arrived to Lanka and was barred entry by an enormous female warrior, Lanka-Lakshmi, who let out a ferocious roar. Hanuman knocked her down with a single blow. Lanka-Lakshmi politely asked his mission, learned of Rama, went to him, worshiped him, was blessed by Rama, returned to Satya- loka (the place of truth, heaven), and resumed her duties with a better attitude.