Skip to content
Home Hindu Mythology MADRI, MADRAVTI – One of the two wives of Pandu

MADRI, MADRAVTI – One of the two wives of Pandu 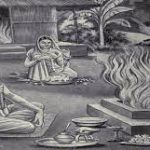 Madri was the second wife of King Pandu and was a mother of two of the five Pandava brothers. When she was lent a magical incantation by Kunti (the king’s first wife) that would allow her to have a child by any deity she focused on, Madri concentrated upon the AsSvin twins, and twins were born to her, Nakula and Sahadeva. When Pandu died shortly after his wives gave birth to the five sons of gods, the Pandavas, Madri joined him on his funeral pyre (sati).