MAITRA-VARUNA – A sage with the patronym from Mitra and Varuna 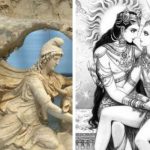 This version of an episode involving King Nimi and the sage Vasishtha was given in the Devi Bhagavata. Nimi and Vasishtha had cursed each other, and the result for Vasishtha was that he was alive but had no body. Vasishtha went to Brahma for advice and was told to merge with the brilliance of Mitra-Varuna (the composite sun deity). So Vasishtha went to Mitra-Varuna’s asrama (hermitage) and merged with that brilliance. When the apsara (celestial damsel) Urvasi came to the asrama, she excited Mitra-Varuna, whose seed was collected in a jar, and two sages were born when the seed ripened—the great sages, Agastya and Vasishtha.